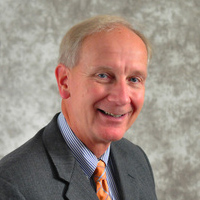 Bob Franseen, pastor of Eagle Heights Baptist Church, was raised in a Christian home and saved at the age of 15. He married his wife Patricia after two years of junior college then completed his degree in engineering at Texas A&M University. After graduation, the Lord led Bob to the Kansas City area where he worked for a concrete engineering company. It was during this time that Bob realized his real calling was not working with “things” but working with people. Bob taught at Tri-City Christian School North and became the principal of Eagle Heights Christian School when Eagle Heights became autonomous. He completed his Master’s Degree in Educational Administration at Maranatha Baptist Bible College and benefited from seminary studies at Heart of America Seminary. Bob has three married sons, eleven grandchildren and has ministered at Eagle Heights for 35 years, 14 as senior pastor.