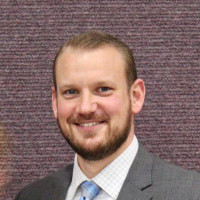 Pastor Bryan Shaffer serves as assistant pastor at Faith Baptist Church in Raymore, Missouri. Bryan and Vanessa Shaffer were married in July of 2007. God has blessed their family with two children Liam and Abigail! Bryan graduated from West Coast Baptist College in 2007. Following graduation he worked in assistant roles until the Lord led him to become the pastor of Northwest Baptist Church in Leavenworth, Kansas in 2012. Pastor Shaffer was eventually led to become the pastor at Liberty Baptist Church in Toledo, Ohio, and then to pastor at Eagle Heights Baptist Church in Kansas City, Missouri before transitioning to his current role at Faith. The Lord has given Pastor Shaffer a specific desire to minister in the Kansas City Northland where he hopes to plant a church in the near future.