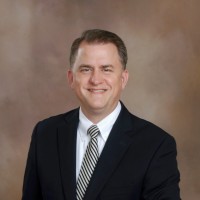 Greg is one of those people who is “from” many places. After entering this world in the state of Utah, he lived in California, Illinois, Florida (for several years), and Alabama, before finally landing in Michigan in the eighth grade. He is a graduate of First Baptist Academy of Bay City, Michigan.

After graduating from high school, Greg attended Pensacola Christian College, where he met the lovely Tamara, also from Michigan, and arranged to marry her as soon as he possibly could after finishing his master’s degree. They are the parents of five children: Kenton, Katie, Justin, Jonathan, and Emilee.

Since 2008, Greg has served as the pastor of Calvary Baptist Church of Ottawa, Kansas. Prior to becoming pastor, he served as interim pastor and (before that) associate pastor at Calvary. Tamara also stays very busy in the work of the ministry, both as a pastor’s wife and a teacher at Calvary Baptist Academy.

Prior to coming to Kansas, Greg served for seven years as an assistant pastor and Christian school administrator in Memphis, Tennessee; and for five years as a Christian school teacher in Savannah, Georgia. Before that, he worked as a textbook writer for A Beka Book, contributing to three science textbooks. He has also been active in music ministry over the years, both as a soloist and as a church music director.

Greg’s greatest passion is preaching and teaching the Word of God. In his spare time, he loves spending time with his family and his church family, reading, fishing (when he gets a chance), finding great deals at thrift stores, collecting and listening to classical music CDs, playing strategy games that take hours to finish (especially Risk), using Apple computer products, and enjoying the Kansas countryside. He loves all kinds of coffee, but especially Dunkin Donuts.